The world’s biggest oil tanker has begun a 12,400-mile voyage to a fuel-storage zone in Asia, the latest movement of a vessel that’s intrigued the shipping market and fuel traders for months.

More than 1,200 feet long, 16 years old, and able to hold roughly a day of France’s and Britain’s combined oil consumption, Oceania will arrive at Sungai Linggi in Malaysia at the end of September, according to recent signals from the vessel. Its depth in the water and previous movements indicate the so-called ultra-large crude carrier, owned by Antwerp-based Euronav NV, has cargo on board. 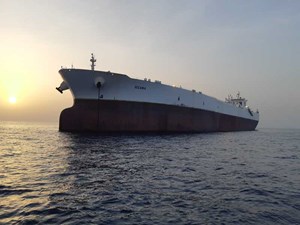 Oceania, currently sailing past West Africa, has been accumulating cargoes in the Mediterranean Sea since about March. Euronav’s original plan was to use a supertanker to store fuel to help its fleet meet rules known as IMO 2020, which will force merchant ships to cut sulfur emissions. The company has declined to comment further on the matter multiple times. The vessel is Oceania, according to tanker-tracking data from Vortexa. When the ship arrives in East Asia, it will join an armada of carriers also storing products that will meet the regulations.

“This is unusual and certainly an interesting way of dealing with the IMO 2020 story,” said Eirik Haavaldsen, a shipping analyst at Pareto Securities AS in Oslo. “It is not without risk. But it’s interesting, and it’s also a bit more sophisticated than the rest of the shipping companies.”

It’s hard to gauge Euronav’s exposure to price fluctuations since the company may have locked in future prices for the fuel, Haavaldsen said. The tanker owner said during an earnings call last week that it has borrowed an additional $100 million in relation to its IMO 2020 fueling strategy, adding that there would be a further briefing on Sept. 5.

Starting in January, the vast majority of ships will have to consume fuel containing less sulfur under the rules mandated by the International Maritime Organization in London.

IMO-compliant fuels will probably cost significantly more than the type that ships mostly use today, prompting some owners to invest billions of dollars in equipment allowing them to keep burning the current product. A majority though — including Euronav — have opted to switch to low-sulfur fuels.

The new rules will require vessels to limit sulfur content to 0.5%, down from 3.5% in most parts of the world today. The pollutant is blamed for causing acid rain and contributing to human health conditions such as asthma and even lung cancer.

By storing compliant fuel on its giant ship, Euronav could be able to ensure its own requirements are covered when the new rules kick in. Alongside its sister ship, the Europe — currently off the coast of Malaysia — Oceania has a bigger cargo capacity than any other vessel in the world, IHS Maritime data compiled by Bloomberg show.

Some of the world’s top trading houses earlier this year began to gather a fleet of tankers in southeast Asia to receive, store and resell millions of barrels of products such as low-sulfur fuel oil, diesel and light-cycle oil in what would effectively be a mini supply-and-distribution hub out at sea.

More conventional sea-storage trades normally happen when oil markets are weak, driving down immediate prices below future ones. When that price gap grows so wide that it exceeds the cost of hiring a tanker, traders can park cargoes at sea and sell them later at fixed profit.

It’s harder to say how easily Euronav would be able to lock in any profit on Oceania because the exact specification of fuel on board remains unclear. Not everything on Oceania is an oil product, either. The most recent cargo loaded onto the ship was low-sulfur crude from a field in the North Sea. It’s unclear how that fits in with the fuel the vessel previously loaded.

“With this IMO stuff everyone is going into uncharted territory, and I mean everyone,” said Steve Sawyer, director of refining at Facts Global Energy.