OPEC’s spare capacity may be put to the test as oil prices jumped on Tuesday after tensions in the Middle East rose on multiple reports of unrest, including four damaged oil tankers at the hands of unknown saboteurs and an attack on an oil pipeline in Saudi Arabia.

As prices rise and geopolitical threats escalate, OPEC’s production continues to decline, leaving the market to wonder weather OPEC will be able to react to such market turmoil.

The rise in prices falls in line—today at least—with most analyst’s sentiment, including that of Rystad Energy, that these supply disruptions, along with an already tight oil market, could send prices “violently upward”.  This perceived tight oil market comes as Iran and Venezuela are producing significantly less crude oil today than they were a year ago.

And while it is generally understood that Saudi Arabia is doing more than its fair share of the production cuts, and that it has plenty of self-professed spare capacity should it want to turn back on the taps, the Kingdom’s production has been more stable than Iran and Venezuela, producing 9.959 million bpd in April 2018, falling to 9.742 in April 2019. The net result year to year is a decline of almost 1.9 million bpd—most of which cannot be turned “back on” as Venezuela and Iran have slim hopes of returning to their former glories. 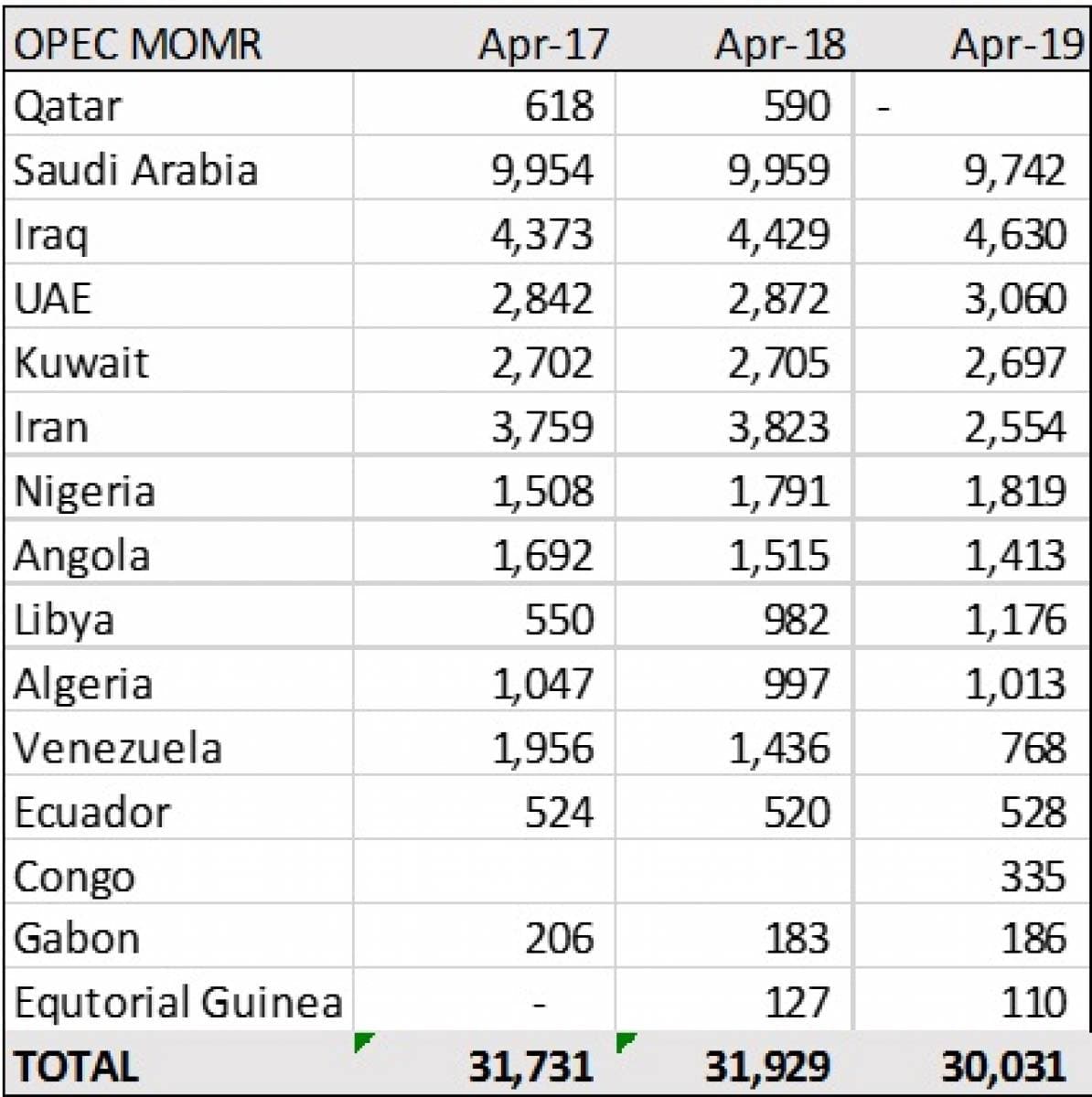 In fact, it is largely expected that production in both Iran and Venezuela are set for additional declines, leaving Saudi Arabia as the only likely member that has the ability to increase production in the short term should another unexpected supply outage take place.  According to Energy Aspects geopolitical analyst Riccardo Fabiani, cited by Reuters, Iran may lose yet another 500,000 bpd by year’s end. Goldman Sachs, according to Reuters, forecasts that Iran’s oil exports will settle between 400,000 and 900,000 bpd lower than April levels, which are near 2.5 million bpd.

Even Russia, who has finally lowered its production to the level it agreed to as part of its collaborative efforts to rebalance the oil market, is unlikely to have enough spare capacity to offset further supply disruptions if there are any.

The United States, on the other hand, is able to keep ramping up oil production, although it will likely be at a measured pace, barring a significant uptick in prices that would make additional investments worthwhile and put more barrels in the range of profitability.

Despite OPEC producing 1.9 million bpd less this April than last, the United States’ increase in production has done nothing more than soak up much of OPEC’s decrease, adding 1.4 million bpd over the last year.

The oil market will likely react quickly to any additional supply disruptions, which are likely given Libya and Nigeria’s checkered past, but will be tempered by still-high crude oil inventories in the United States, which have increased 20.92 million barrels since the start of 2019.