The fighting in Libya has sent Brent above $70, despite the fact that the fighting is not near the oil fields. The thinking is that a failed attack on Tripoli by General Hifter’s forces might see a counterattack that would threaten the oil infrastructure in the eastern part of the country.

While the main target of Hifter’s forces is Tripoli and the Misrata militia, whose presence is in the west of the country, the conflict could embolden other groups to leverage the fighting to improve their take of the oil revenue. Recall that the Sharara oil field was recently shut down by the local militia in a financial dispute.

But Libya is hardly the only fire heating up oil markets at present. The Trump Administration’s increasing pressure on Iran, including the threat to declare the Revolutionary Guards Corp a terrorist group, has seen the Guards commander warn, “If the U.S. takes this step and endangers our national security we will take reciprocal measures, based on the policies of the Islamic Republic.”

Obviously, such Iranian threats are hardly new and could just prove to be bluster. Alternatively, while any overt military attack on U.S. forces in the region is unlikely, the possibility that a proxy group might be employed to undertake a suicide bombing or other unconventional attack always remains.

The current U.S. Administration is taking hard line against Iran, but the President also seems unwilling to start up any significant new military conflict.

Still, the possibility of tit-for-tat bombings and air strikes, or a refusal to renew waivers for lifters of Iranian oil, could presage another bump in oil prices.

Algerian protests are also on traders’ radar, as they could threaten 1.5 mb/d of petroleum supply (including NGLs).The president has already been forced to resign but the opposition to the regime remains strong. To date, the unrest has not affected oil production, but continuing strife could see a strike among workers in the oilfields or the docks, for example.

Other political threats could add to the security premium, even if they do not immediately threaten oil supply. The Arab Spring in 2011 resulted in a loss nearly 2 mb/d, but prices rose after protests began but before supply was disrupted.

The unrest began in mid-December with the suicide of a trader in Tunisia, even in February production had not dropped significantly, as the figure below shows. 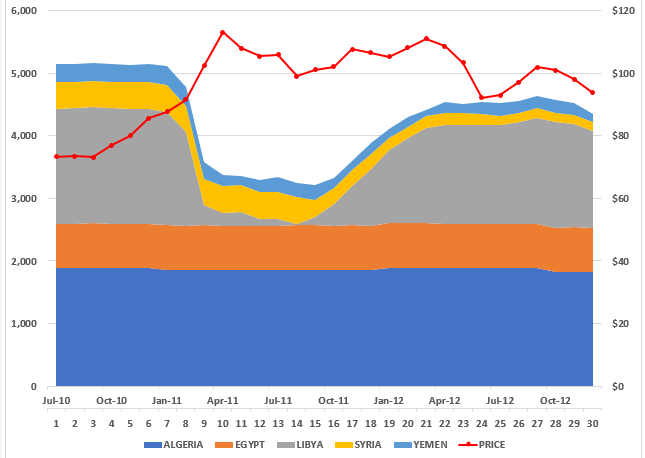 Yet oil prices rose steadily from the beginning of the unrest, as the second figure shows, with the sharpest jump when unrest spread to Libya, where most of the production losses occurred. (Egypt suffered unrest but, perhaps because much of its oil is offshore, production didn’t drop, and Algeria suffered no major protests or disruption.) 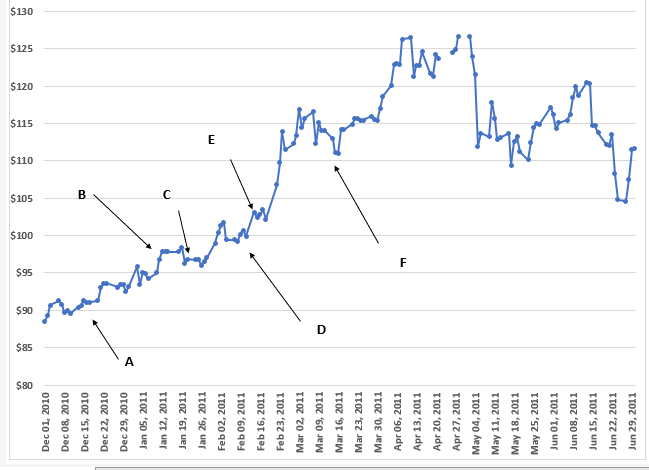 The lesson being that lost volumes matter, but so do threatened volumes. The days when the “Arab Street” was thought monolithic (and sometimes included non-Arabs) are long gone, but the concept of political contagion remains with us. Sudanese protesters are hardly likely to be taking a cue from Algerians, but nevertheless social media spreads awareness of activism and can cross-pollinate it.

Finally, the Israeli-Palestinian conflict could be entering a new phase, as aggressive moves by both President Trump and Prime Minister Netanyahu are exacerbating tensions in the region. By declaring his support for Israeli Sovereignty over the Golan Heights, the President has antagonized both Syria and its allies, but some of our Arab allies as well, although the anger is surely much less than it would have been several decades ago.

P. M. Netanyahu’s claim that Israel will annex West Bank settlements could be more problematical, assuming he wins the election. Anger amongst Palestinians could see increased violence such as a new intafadah or an Israeli clash with Hamas, Hezbollah or both.

Again, this is unlikely to have any effect on oil supply, but could raise concerns among oil buyers and traders that unrest elsewhere could worsen or make some oil producers more militant. The price impact is likely to be more insult than injury, but news of Middle East violence never calms oil markets. Oil prices are likely to remain elevated for some time as a result.